Lots of people have shown an interest in a clover lawn. I have had one for six years and here’s what I’ve learned. I’ll start with what it looks like, and then explain what I did below. 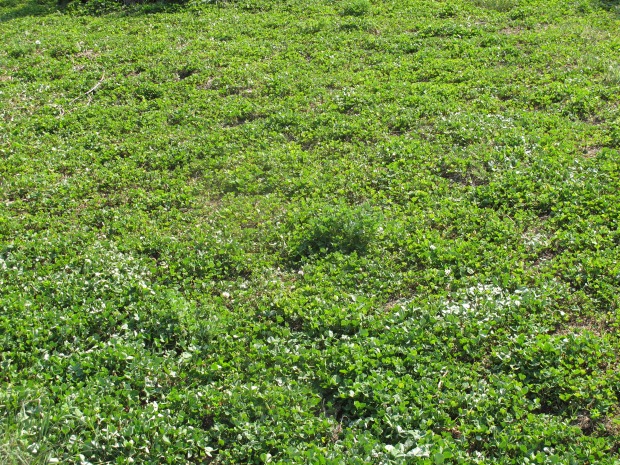 A view of the backyard. Most of the groundcover is clover. Some of it is weeds.

Clover in January, because someone once asked what it did in the winter. 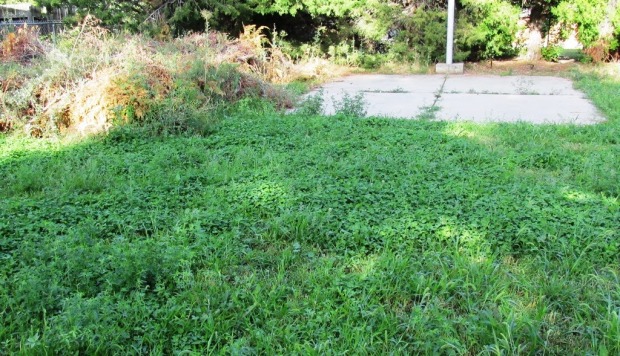 Clover a few months after planting. Lots of weeds, but with mowing, it did outcompete most weeds. If you don’t mow, it will probably end up looking a lot like this.

Plant in spring or fall. I have successfully seeded in May and September. Control your weeds first. Some weeds are okay but too many and the clover won’t grow. Annual weeds aren’t a huge problem, perennial weeds are. I sprayed my perennial weeds before seeding with a broad spectrum weed killer. Then I mowed whatever I had left as low as I could go, seeded in the clover, and raked it in. If you till (I never did), beware that you just planted a bunch of weed seeds. You probably want to wait a few weeks and control the weeds that will germinate first then seed.  Chicken tractors are also a good option for soil prep, but if there is too much manure the seeds won’t germinate. Irrigate frequently when plants are young, but I did successfully germinate clover only irrigating two times a week after seeding. I have not had wide success overseeded clover in an existing lawn. Some incremental success, it’s just been a slow process.

There are inoculants you can buy with the clover: I didn’t see a huge difference the one time I used it. I planted white dutch clover, New Zealand white clover, both were similar. Crimsom clove is a fun addition but is shorter-lived and not as soft. I have also successfully interplanted fine fescue and yarrow. The more you interplant the more it starts to look like a meadow and not a lawn.

Clove adapts well to crappy soil. My soil is alluvial plain gravelly loam. Well-drained but packed full of rocks. The clover has helped improve the soil, so that is a good bonus. It does very well planted around other plants like trees, shrubs, etc. It also one year overtook two tomato plants, but the tomato plants still surprisingly produced tomatoes even when covered with clover.

Overall, clover does take a few years to fully establish and fill in. It will outcompete most weeds when mature, but note that you cannot spray for weeds like you do in lawn, and there will always be a few weeds.

If you want it compact so it looks like a lawn, you will need to mow. Mowing also helps get rid of weeds. I mow about every one-two weeks but have let it go a month or more without mowing.

Clover will handle some traffic. The areas that are tromped daily by my basketball-loving son have died off.

A lot of people want clover to reduce irrigation. Water needs are similar to lawn, maybe a bit less. Clover shows drought easily and will need frequent irrigation. I water mine deeply two times a week in the heat of the summer through flood irrigation. It does bounce back quickly from drought.

Bees are often feared. When the clover is in flower there are a ton of bees. But I have had one bee sting in six years, and I have kids running over the clover all the time.